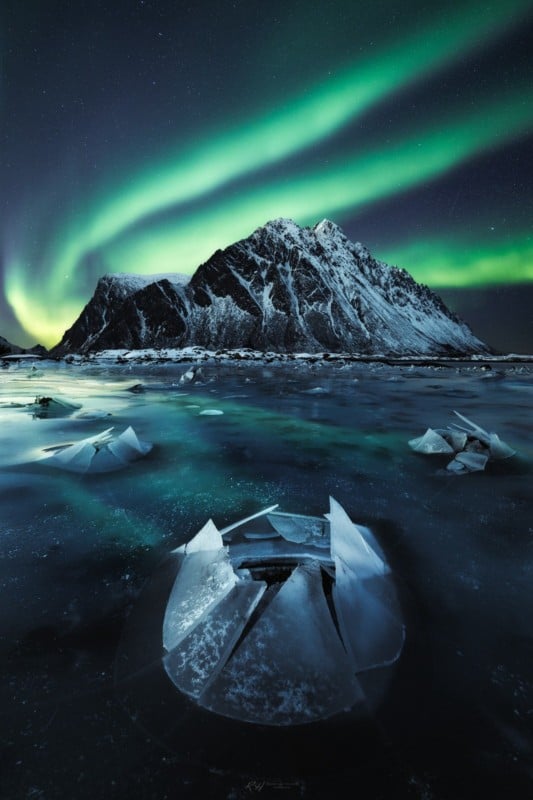 El Diablo: You could have just put Marc Adamus as the only landscape photographer and eliminated most of these copy cats. He and a couple others (Chip Phillips for example) basically created this style of disneyland-ish landscape photography just as real dslrs were becoming a thing. At least Marc and Chip were original and explored locations and photoshop ideas for others to eventually copy. Now it's just a bunch of silly instagram and other social media hacks with zero original bones in their photoshop bodies. Over photoshopping a weakly composed and/or boring image does not make it good.

Zenon Toczek: Over processed mediocre, with bad dead center composition captures would be enough to dismiss bulk of them, but that is only the beginning. To much vignetting, fake fog, fake sun rays that do not converge at the source and seem to be bending in midair, overblown white bird (without any indication of direct sun) in convenient, perfectly centered dark oval spot, bad sky with contrails, lack of horizon to mask use of fake reflections... If pressed very hard, I would like maybe three of them as decent captures, but nothing really spectacular to be writing about.

Years a go, I was so happy for photography, when it became so democratic with use of digital and web photo forums, when suddenly staying home moms started taking pictures and solely based on instincts were able to take better pictures than many then "acclaimed" pro photographers. Remember the embarrassment? Than of course FB and Instagram come with ways to wrap and direct up everything just the way they like it.
The natural internet democracy in photography became distorted if not perverted. The product we see is what usually is when the mob decides what is good in arts- KITSCH!

George: I get it. People want excessive drama and excitement. That’s why cinema has the transformer movies and music has Taylor Swift. People are entertained by the sensational and often hold these and similar examples as the benchmark for great cinema and music at the expense of other, more subtle works being ignored. These photos are certainly exciting and full of drama. However, there are many works of subtlety and beauty that lack thintense drama and excitement. It is easy to overlook these and miss the opportunity for further inspiration.

Simonella: These all looked overcooked to me. As if someone created them from scratch in a computer program. Yuck.